Last week I published a Skredch-blog 'War of the words' about tactical pens. Or actually the meaning of the expression 'the pen is mightier than the sword'. I still use pens. Sometimes to write, sometimes just for the fun of having them...

Not that I am entitled to call myself the worlds number one collector of pens, but I do have a small collection of memorable, artistic pens. Like this great item, the 'ZigZag (jaune filet rouge)' from French  designer Jean Pierre Lépine. Not only an awesome design; it also does what it is supposed to do: it writes marvelous!


Just the way I like a pen. Steady, some weight, giving you the impression you are really at work. However, I don't use pens to write my stories. I'm really not that 'old school' you know. Writing is so much easier using a computer. Copy, paste, replace, delete; all those neat functions are making it so easy. And, best of all, I can do it the way I do it best: typing with two fingers. 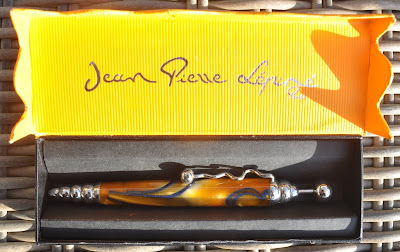 Yep. I do have an official typewriting certificate. A diploma I earned way back (somewhere in the seventies) by carefully typing, blindfolded and using ten fingers, on one of those old fashioned typewriters. How on earth I managed to get something or anything readable on my paper, I don't know. But somehow I succeeded in achieving this important document.
Alas for my teacher, with his fierce and compelling eyes, even before I finished school and started working, word processors took over...

I only recall one moment this certificate was supposed to be valuable. In military service. I had my basic military training in the 'Isabella Kazerne,' a barrack in the city of Den Bosch. Nowadays military service no longer is obligatory in Holland. But in those days it was still mandatory. And guess what? I was one of the last youngsters who had the privilege to fulfill this obligatory service... We all were eager to escape the daily routine of the first basic training. So, when the sergeant asked if anyone had a typing diploma, several guys raised their hands. Not me. I knew the drill. Surprisingly even after multiple times of asking this stupid question, there still were guys eager to raise their hands only to hear the sergeant say: "Great... then you may carry the ammunition box..." 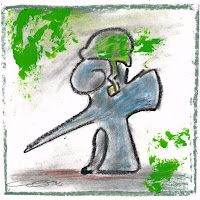 Read the Skredch blog 'War of the words' here.

Like this week's artwork? Have a look at the original artwork (without the pen on top) and order your own artprint, mug, T-shirt etc. of  'Unwritten'