For the second year in a row, our four Ragdoll cats made us decide not to put up a Christmas tree. Instead we bought some Christmas Roses (Hellebores) for our garden. We did cut a tree though...

We have four cats, each with its own will. And each very stubborn. No matter how many people tell us that having a Christmas tree ánd cats doesn´t have to be a problem (yeah, right...), we have visions of havoc in our living room, so... No thanks, no Christmas tree.
We did need to cut a tree though.
Not a Christmas Tree, just one in our backyard that had grown way over our head. Way over our house as a matter of fact. We were afraid it might fall down during a storm. So we had it cut and removed and were confronted with an empty space. Not only where the tree had been, but also the area beneath its branches. We certainly could use some new plants. In this time of the year we really miss some flowers and, although they mostly have subtle colors, Hellebores are blooming. A logical choice. But there´s more. They appear to be a source of inspiration for my writing... 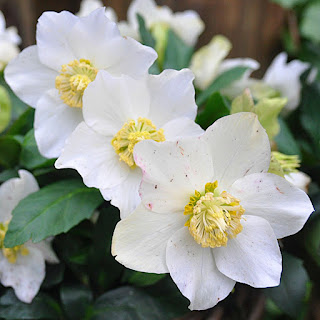 Despite names such as "Winter Rose" and "Christmas Rose" these plants are not closely related to the rose family and, except Helleborus niger, most species are not even blooming in December. Hellebores are (evergreen) perennial flowering plants. The most popular Hellebores for garden use are H. orientalis and its colourful hybrids, mostly known as "Lenten Rose". In the northern hemisphere, they flower in early spring, around the period of Lent. The Christmas Rose, H. niger, bears its pure white flowers (which often age to pink) in the depths of winter.

The plant owes its name, hellebore, to its medicinal use. The dried roots, ground into powder, cause a lot of sneezing when sniffed. In Dutch they are therefor known as "Nieskruid"; sneeze herb). The root is highly poisonous due to the presence of hellebore, which tastes bitter. The root powder was used by the Greeks for insanity and epileptic seizures. Laxatives still contain potential ingredients from hellebore root. It is even believed that Alexander the Great (356 BC to 323 BC) may have died of a hellebore overdose.) There is no certainty, but people have been speculating for centuries about his excessive use of hellebore. 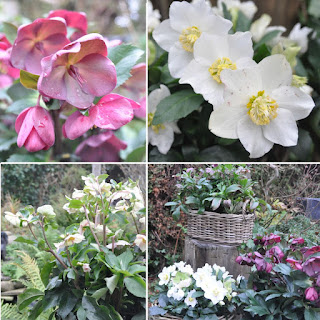 All parts of the plant are toxic to humans. In Greek myths, it is connected to the Maenads and other wild women who wandered naked and in a trance, such as the priestesses of Dionysos, god of wine and ecstasy. With this and its poisonous effect it´s no wonder they were used by witches. Ah Hellebore, a witchwort!

And how about this? A Helleborus protects its flowers against frost in an ingenious way. When it freezes hard, she pumps out the moisture, which she temporarily stores in the leaves and roots. The flowers then hang limp for a while, but do not freeze. Will the weather get better? Then the Christmas rose pumps the moisture to the flowers again and she soon looks radiant again!

Truly amazing. Not only did I learn about the plant, I also got several ideas to write a new story. But there was one more thing I didn't know... Helleborus comes from the Greek "hellein" (to kill) and "bora" (food) and means "deadly food". Yes, a deadly plant. I think I mentioned I live in a city called Hellevoetsluis once or twice. Well I wondered. Is "Helle" in our cityname also referring to death...? Apparently not. In this case Helle refers to the former "Helle Sea", presently known as North Sea. In (Dutch) toponymy, "helle" means "slope; especially low, or low-lying (and thus often swampy)." A little disappointing till I found something new. All this research led to another fact I didn't know. Since the third century there has been a true Dutch goddess: Nehalennia the goddess of the North Sea. Oh, oh. I dream away easily and I can feel a new story coming...

So... No. No Christmas tree, but man I can't wait to put all my ideas into a story! 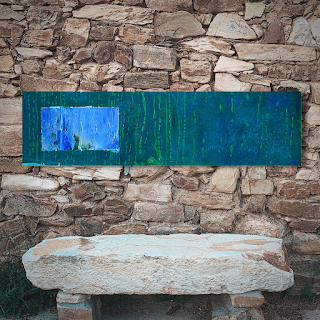 This week´s artwork "Dreaming off" can be ordered in my printshop.
You can read the story behind this title in my newsletter.
Email ThisBlogThis!Share to TwitterShare to FacebookShare to Pinterest
Newer Post Older Post Home
Language: DE - EN - ES - FR - NL