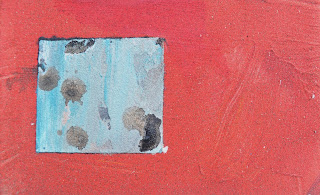 Autumn colours, or Autumn foliage, is a temporary phenomenon caused by the lack of Chlorophyll. This artwork however refers to another suprising phenomenon: a mushoroom known as Chlorophyllum.
[Daily Abstraction 218101901. Painting available].

A green leaf is green because of the presence of a pigment known as chlorophyll. During the growing season, the chlorophyll's green color dominates and masks out the colors of any other pigments that may be present in the leaf. Autumn leaf color is a phenomenon that affects the normally green leaves. During a few weeks in the autumn season, leafs take on various shades of red, yellow, purple, black, orange, pink, magenta, blue and brown. A phenomenon commonly called autumn colours or autumn foliage. 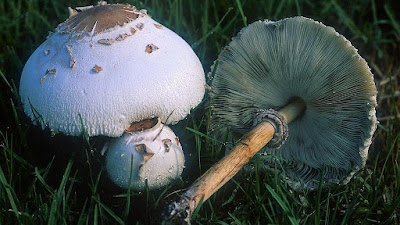 It is an imposing mushroom with a pileus (cap) up to 40 cm in diameter, hemispherical and with a flattened top. The cap is whitish in colour with coarse brownish scales. The gills are free and white, usually turning dark and green with maturity. It has a rare green spore print. The tall stipe may be up to 25 cm tall and bears a ring. This mushroom lacks the snakeskin pattern that is generally present on the parasol mushroom. It is the most commonly consumed poisonous mushroom in North America.
Email ThisBlogThis!Share to TwitterShare to FacebookShare to Pinterest
Newer Post Older Post Home
Language: DE - EN - ES - FR - NL