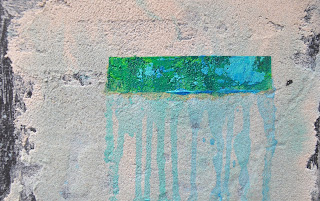 Songs can be very inspirational, but just as easy they can be an emotional rollercoaster. The French chanson Ma dernière volonté (meaning: my last wish) is beautiful and emotional as it is. Nevertheless in The Netherlands we have a Dutch version which is almost in contradiction with the original version and yet just as beautiful. Combined tears of joy and sadness...
[Daily Abstraction 218091801. Painting available].

Reggiani sings about someone lying on his deathbed, in desperate fear of dying, Shaffy sings about himself as someone in his midlife term; a man full of joy, full of life and without fear of death. The French text is a 'last wish'; a cry to stay 'alive'. The Dutch version is a powerful and passionate statement from the singer to his environment; a wish to 'stay who I am'.
The French and Dutch version were respectively produced in 1977 and 1978. In 2005 (4 years before the artist Ramses Shaffy passed away) the Dutch band 'Alderliefste' and the female artist (and Ramses' friend) Liesbeth List, recorded a magnificent version of this song, combining both French and Ducth lyrics. Listen to 'Laat me / Vivre' and feel both the pain and the joy that make this song unforgettable: