Rearranging my website and blog, I was told I should add a Favicon. You know, the small, no... tiny, or, well, actually extreme tiny icon picture, you see in browser tabs, address bars and more. (Hence the name, which means a 'favorite icon'). Haven't really noticed them?  No big deal... (duh-huh, favicons measure 16x16 pixels).

Most authors and artists use their initials, but, well, you know me, I wanted something different. So I decided to use an optical illusion showing theinitial of my first name.
At first I wanted the 'E' I use to sign my artworks but in the amazing favicon format this turned out to be nothing but a blurry mess. I used one of the most famous optical illusions; the Blivet; also known as the impossible fork (or Devil's fork, yikes!) an impossible object and undecipherable figure. 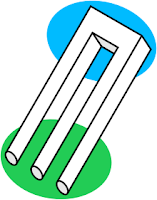 The Blivet, which has three cylindrical prongs at one end which mysteriously transform into two rectangular prongs at the other end, has been a success since its introduction in 1964. It appeared on the March 1965 cover of Mad magazine and has been used by many artists since then. (Note: you can find all these little cover treasures on Doug Gilford's Mad Cover site).

As far as I can tell it has not been used by the master of graphic arts, M.C. Escher, who is well known for using many optical illusions in his woodcut prints, like the Pennrose, the impossible triangle as shown in the impossible LEGO construction:

Anyway, the threefork had to become a letter 'E'. A similar object had already been created in 1965 by artist Greg Hill. He named his "improved Blivit" a "Square pronged, Triple slot Blivit". My interpretation, the basic character for my favicon, is on top of this blog. (The favicon in the addressbar remains a bit blurry, but you'll recognise it anyway). Hope you will notice it on top of your screen every now and then because that means you're back to read my blog! I will certainly use it in some future artworks.

By the way, the Blivet also inspired Greg Hill to invent his 'Hodge Podge Transformer'. As said, the Blivet has inspired many people. It seems noone has heard about the unfortunate technician who was asked to solve the situation underneath... 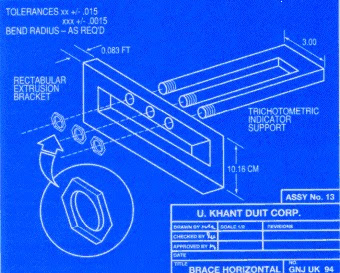