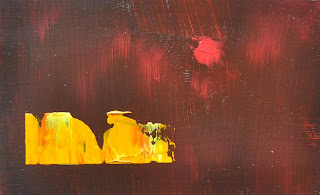 While the world commemorates the end of WWI; and despite all those great political leaders who stated 'No more!' after all those tragic wars that followed after WWI, wars still linger on.
I guess instead of commemorating the end of war; all those politicians who gathered in Paris yesterday, were commemorating humanity's incompetence to live together in harmony. A tribute to the lack of civilization.
[Daily Abstraction 218111201. Painting available].
Email ThisBlogThis!Share to TwitterShare to FacebookShare to Pinterest
Newer Post Older Post Home
Language: DE - EN - ES - FR - NL