This is for everyone still waiting at the end of the day... Yep, it's Valentine Day. A day of hope and fear for those waiting for love...


I picked these overblown flowers in our garden last November. Unintentionally, certainly not meant for a Valentine bouquet. Simply because they are beautiful when they are blooming and maybe even more beautiful and delicate when dried at the end of the season. 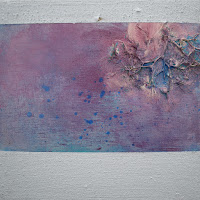 Little did I know about the origin of the flowers in Europe. The first Hydrangeas were brought to Europe from Japan by Philipp Franz von Siebold. A man sometimes referred to as being Dutch. In reality he worked as a physician and scientist for the Dutch military, but he was born in Würzberg, Germany in 1796. Von Siebold worked in Japan where he fell in love (Ah! So it's a love story after all!) with Kusumoto Taki. They lived together until Von Siebold became accused of being a spy for Russia, and as such was expelled from Japan in 1829. He had to leave without his love. Went back to Europe; settled in Leiden (The Netherlands) taking with him his major botanical collection (12,000 specimens); the earliest Japanese collection in Europe and even today a subject of ongoing research. One of the species he introduced was Hydrangea. 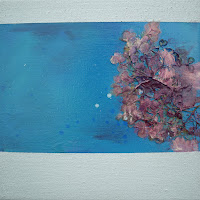 Yeah, yeah, I hear you... What about love?
Von Siebold and Taki had a daughter. Kusumoto Ine (1827-1903), the first female Japanese western physician and court physician to the Japanese empress. A love baby, what else do you need to appreciate these lovely flowers?

The name Hydrangea comes from the Greek 'hydor', meaning water, and 'angos', meaning jar or vessel. Roughly translated: 'a barrel of water'; a name that refers to the Hydrangea's need for plenty of water and its cup-shaped flowers. The star shaped flowers are packed closely together as in a pompom. The Hydrangea's color ranges from white to blue, pink and purple; its color is determined by the acidity level of the soil. (Yep, that's why your blue Hydrangeas turn pink next summer...). 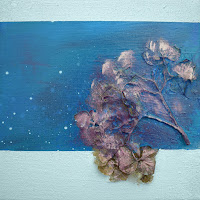 So, to all of you who have waited all day long for a token of devoted but unexpected love from a secret admirer or an unknown lover that, unfortunately, didn't show up. Or didn't dare... Be my Valentine! This bouquet is for you! 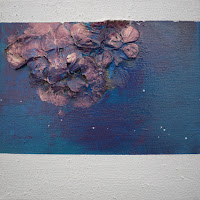 Interested in buying this bouquet (a set of 4 small paintings) or prefer to have a print of the photo above? Take a look at my blog Daily Abstractions 218021401-04 for all details on originals, prints, Tees, mugs and more.
Or check out my printshop.
Email ThisBlogThis!Share to TwitterShare to FacebookShare to Pinterest
Newer Post Older Post Home
Language: DE - EN - ES - FR - NL