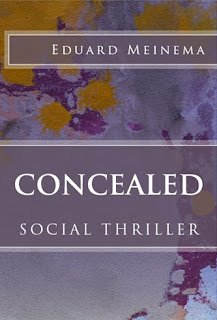 Synopsis / Flap text:
They were young. Hardly men at the time. Their mission: highly classified. To them it was no more than an adventure. But reality was harsh and relentless. Terrible doubts assailed them. Even though the army hushed it all up professionally,  these men would never forget. They shared a secret. A secret they would hide for the outer world. That was twenty years ago.
Now someone was brutally murdering them one by one. The offender systematically eliminated the former members of their team. The only way to survive was to cooperate. After all these years they had to rely on each other again. Had to trust each other again. They had to find the assassin, before he would murder them. Only one thing they knew for sure. One of them was the murderer…

Inspiration:
During a journey to Costa Rica, I visited Golfito. That was more than twenty years ago. The heat really was unbearable, we only stayed for two or three days instead of the week we had planned to stay.
There was a restaurant next to our hotel.
And there was a bar on the other side.
And the police raid really did happen.
But, 'Concealed' remains fiction. I mixed up reality, news paper articles and documentaries, with events I made up myself. Nevertheless, a lot of this story is true. And needs to be told and revealed. Unfortunately...
Travelled through Costa Rica in 1992 with my friend Kees de Jong. No surprise you will find his name in this story as well (anglisized as 'Casey Deyoung'). Also read: 'Close to the Edge'; another story based on this journey.
The other characters are made up, or, in some cases combinations of people's names: Michael Visione is based on the first name of my friend, the painter and cineast, Michael Lasoff; the last name actually belongs to his buddy, and also artist, Mark Visione.

List of characters
Characters alphabetical by last name. Nicknames and characters only known by their first name or their last name, are given underneath this list. Unnamed characters are not listed!